In addition to my very young nieces and nephews, I have three older nieces, aged 13, 17, and 19. As with the younger kids, I wanted to make something for Christmas that would appeal to all three of them and would be somewhat utilitarian. I found an awesome tutorial for paint sample calendars and decided to try my hand at it. So here goes.

Supplies
1. First, let's talk about paint swatches. When I started this project, I was under the impression that Lowe's would give me one of those big paint swatch books and I could just rip the strips I wanted out of it. Not so. Nowadays (at Lowe's, anyway), free paint swatches do not come in long convenient strips. They come in very inconvenient squares that you would need to individually cut to size for this project. What I did was sweet-talk the Lowe's guy into letting me borrow the book of paint swatch strips, which I then took home, chose the colors I wanted and scanned them into my computer. My boyfriend later pointed out that I could have just scanned one strip and then changed the colors on the computer. If you are computer savvy, feel free to do that. In the end it was a bit annoyed but worked fine to just scan all the colors I wanted.

2. OPTIONAL STEP: I didn't want the names of the paint colors on my swatches. I thought they would be distracting. So I used the eyedropper tool in Paint to match the paint colors and then color out the words on the swatches.

3. Cut/print swatches to size. If you use the NYTTJA frame, a 2" width for each strip works well. If you're using a different frame, keep in mind that you need seven strips to fit comfortably within your picture area so size accordingly. Since all of my strips were scanned into the computer, I just used the ruler in Word to make sure they were all 2" wide and then the lengths adjusted around that.

4. Secure swatches to poster board. I don't have pictures of this process, but what worked well for me was placing all of the strips down first with a little tape to make sure my spacing was good and then individually gluing them down while leaving the other strips in place for reference.

5. Place completed poster board in frame.

6. Since I gave this as a gift, I wanted to include the writing utensil. You can use a dry-erase marker, but I opted to go with wet-erase, like you would use on overhead projector pages. My rationale was that wet-erase stays on better and would be less likely to fade over the course of a month and the point of the pen is finer for writing on the calendar. Plus, dry-erase can be difficult to remove after a long time, and wet-erase can be cleaned with just a wet paper towel.

And that's it! I did three calendars, each in the favorite color of the niece in question. Then I filled in January to get them started. Needless to say, they loved them. Or at least pretended to. 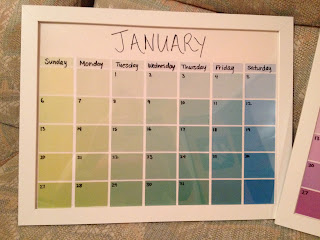 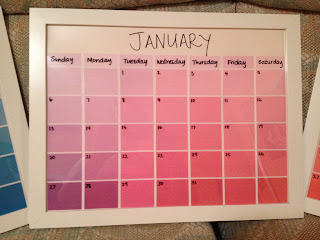 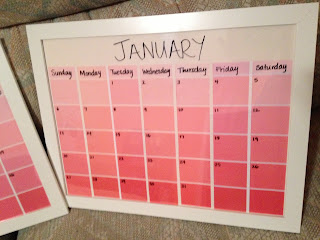